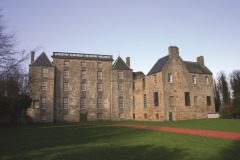 Archaeologists and historians have been working together, delving into documents and surveying Kinneil House. They presented their findings at a special Experts’ Day in Bo’ness on November 19.

You can listen to audio from the event by clicking the player links below.

The audio is also available on Soundcloud.

Arkady is an independent historian with a wide knowledge of medieval and later Scottish History.  He has undertaken many research projects on Historic Environment Scotland properties including Edinburgh Castle, Inchcolm Abbey and of course Kinneil House.  For this project, he trawled through archival material uncovering some previously overlooked documents which shed new light on how the 16th century Hamilton family saw themselves and how they furnished their house.

Tom is an archaeologist with particular skills in interpreting standing buildings.  He established Addyman Archaeology,  a division of Simpson and Brown Architects, which is now one of the leading archaeological companies in the north of Britain concerned with historic building, recording and analysis. He has undertaken building analysis for English Heritage at Bolsover Castle, and National Trust for Scotland at Culzean Castle and Historic Scotland at Queensberry House, part of the Scottish Parliament site.  His close examination of Kinneil House has helped revise the generally accepted story of its development.

Michael is an independent historian and expert in medieval and renaissance interiors, including painted decoration.  He has undertaken many research projects for Historic Environment Scotland including recent work on Craignethan Castle, which like Kinneil was built for a branch of the Hamilton family.  Michael’s particular expertise enables him to assess the painted decoration within the house and also share some fascinating details of how the family used the house, down to what was on their table for dinner!

Adrian is an archaeologist and Research Associate with the Glasgow Iona Research Group, University of Glasgow. He specialises in archaeology of the late Iron Age, early monasticism and medieval Christianity and has most recently been involved with a major project on the early monastic site at Iona Abbey. Adrian will talk about the unique Kinneil Cross, giving us some context and background for this very remarkable piece of sculpture.

Geoff is Archaeologist & Keeper of Local History for Falkirk Community Trust.  He has an unparalleled knowledge of the Bo’ness area, and of Kinneil House in its wider context, including its relationship to the Antonine Wall and later settlements.  He has published widely on the history and archaeology of the area.  He brings this deep understanding to the project to talk about the designed landscape around Kinneil in its heyday. 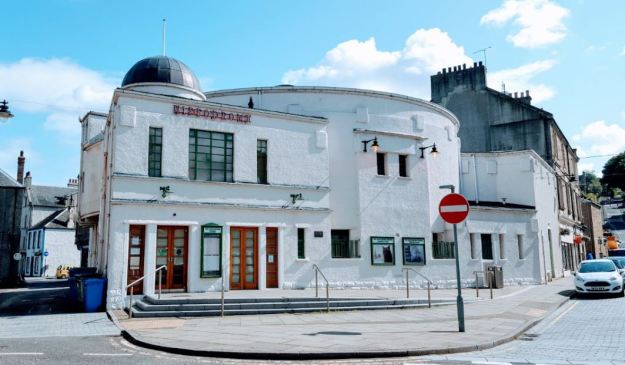 The Hippodrome Cinema in Bo’ness – the main venue for the free community conference, exploring the history of Kinneil House.