The mansion – which boasts some of the best renaissance wall paintings in Scotland – dates back to the 15th century and was once home to the Dukes of Hamilton.

The free tours will start later this month, with the first open day being held on Saturday, March 21 – to tie in with the Hippodrome Festival of Silent Cinema, running in town the same weekend.

The House will get into the movie mood by hosting “Now Showing” – a free exhibition on local cinema-going. There will also a chance for visitors to create their very own movie memories with a pop-up movie-themed photo booth. Neighbouring Kinneil Museum will also be showing movies and more, re-opening after a two-month revamp.

The full line-up of 2015 open days at Kinneil House are:

The events have been organised by the charity The Friends of Kinneil in association with Historic Scotland, which cares for Kinneil House, and Falkirk Community Trust. The House is the centrepiece of Kinneil Estate, a public park (see map for directions).

Maria Ford from The Friends said: “Last year was a bumper year at Kinneil, with a big growth in visitors and some great responses to our open days. We’re hoping for similar success in 2015.

“All of the open events are free of charge and allow people to see inside this wonderful building, which boasts some of the best renaissance wall paintings in Scotland. Kinneil is also packed with history – boasting links to Mary, Queen of Scots, the inventor James Watt, and of course the Romans … who built the Antonine Wall right through the grounds.

“Our guides will be on hand to tell visitors about Kinneil’s amazing story. We’re also planning special surprises and activities to make Kinneil a place you’ll want to come back to, again and again.”

The first event on March 21 has been organised to tie with the Hippodrome Festival of Silent Cinema – http://www.hippfest.co.uk – running at the nearby Bo’ness Hippodrome, Scotland’s first purpose-built cinema.

Said Maria (pictured): “With lots of visitors coming to the town for the Festival, we thought it was a good idea to open Kinneil House at the same time. The March 21 morning opening will allow Festival-goers the chance to have a quick tour of this wonderful building and then go to the movies later in the day. Like the Hippodrome, Kinneil House is an A-listed building and a magnificent place to visit.” 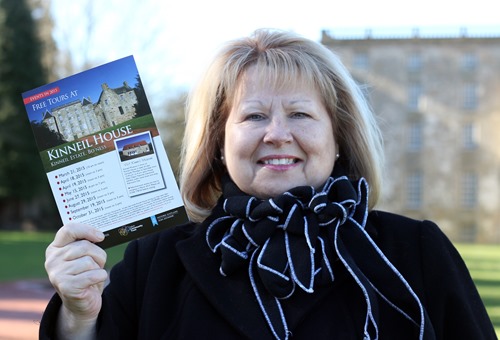 Other Kinneil House events have also been programmed to tie in with national and local events.

The weekend openings on April 18 and 19 will see the first anniversary of the opening of the John Muir Way, the long-distance walking route which runs right past the House. April 18 is also World Heritage Day (and Kinneil is part of the Frontiers of the Roman Empire World Heritage Site). Visitors can expect a costumed interpreter and World Heritage giveaways.

For the Scottish Festival of Museums and the UK’s Museums at Night celebrations in May,  Kinneil House will be opening at night (on Friday, May 15). There will also be an evening opening at Kinneil Museum next door – and a bat-hunt in the grounds of the big house.

June will see Bo’ness get dressed up for its annual Children’s Fair Festival. Kinneil House – an early location for the festival – will open the day after the Fair, on Saturday, June 27. There will also be an additional opening on August 29.

In September, the House – and its wider estate – will be the focus for Big Roman Week, a festival celebrating Falkirk district’s Roman roots. A full programme of events will be revealed later this summer.

The 2015 programme will end with a Hallowe’en themed opening at Kinneil House on Saturday, October 31. The House is reputed to be haunted by the ghost of a white lady.

Amy Mack, Regional Tourism and Community Manager for Historic Scotland, said: “Although you can tour the grounds of Kinneil House throughout the year, you can only see inside the building on these special open days.

“We’re pleased to be working with The Friends of Kinneil to run a new series of events in 2015. The events are free of charge and will offer a variety of experiences throughout the year. Look out for costumed interpreters, themed events and walks in the grounds.”

She added: “The Friends of Kinneil put a lot of time and effort into making the open days such a success. I’d like to thank the charity’s volunteers for all their hard work to make visits to Kinneil so memorable for all our guests.”

Falkirk Community Trust is opening Kinneil Museum at additional times to tie in with Kinneil House open days. The facility is normally open from Mondays to Saturdays from 12.30 p.m. to 4 p.m. Admission is free. The museum has recently been renovated in a project supported by the Heritage Lottery Fund. It is expected to re-open at 10 a.m. on Saturday, March 21, to tie in with the first House open day.

For updates on the events, and more information, please visit http://www.kinneil.org.uk  – or keep in touch via social media: http://www.twitter.com/kinneil  or www.facebook.com/kinneil

The Friends of Kinneil is a registered charity
Charity Registration Number : SC038368