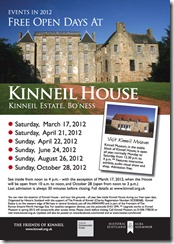 SIX free open days will take place at Kinneil House in Bo’ness in 2012.

The historic mansion – which boasts some of the best renaissance wall paintings in Scotland – will throw open its doors for a series of free guided tours in the coming year.

The events have been organised by the charity The Friends of Kinneil in association with Historic Scotland, which cares for the House.

Visitors will get the chance to see inside the House, which dates back to the 15th century, on:

At all other times, visitors can tour the grounds of the House and the surrounding Kinneil Estate.  Kinneil Museum is also open throughout the year.

The first event on March 17 has been organised to tie in with the Silent Film Festival, taking place at the nearby Hippodrome Cinema – Scotland’s first purpose-built cinema.

Maria Ford from The Friends of Kinneil said: “With its renaissance wall paintings, you could describe Kinneil House as the very first ‘picture palace’ in Bo’ness. It’s therefore quite appropriate that we’re teaming up with the Hippodrome for this special weekend.”

She added: “With lots of visitors coming to the town for the Festival, it seemed a good idea to allow them to see around Kinneil House on the morning of March 17. Like the Hippodrome, this is an A-listed building and a magnificent place to visit.”

The charity has printed 5000 leaflets to promote this year’s open days. You can view a high resolution copy of the leaflet by clicking the picture above.

You can view the exterior of Kinneil House – and tour the grounds – all year. See inside Kinneil House during our free open days.  Organised by Historic Scotland with the support of The Friends of Kinneil (Charity Registration Number: SC038368).  Kinneil Estate is on the western edge of Bo’ness in central Scotland, just off the A904/A993 and is part of the Frontiers of The  Roman Empire World Heritage Site. For satellite navigation devices, use the postcode EH51 0PR. Call Kinneil Museum on 01506 778530. Updates will also be posted on www.facebook.com/kinneil  and at www.twitter.com/kinneil

Visit our maps page for directions from neighbouring attractions and much more. See www.kinneil.org.uk/map