VOLUNTEERS have made a “clean sweep” over Kinneil Estate.

Around 25 people helped collect more than 50 bags of rubbish during a litter-pick in the park today (Sunday).

The clean-up was organised by Bo’ness Community Council, The Friends of Kinneil and Bonnie Bo’ness with the support of Falkirk Council.

Madelene Hunt of the Community Council said: “We were delighted with the response from all the local groups, all their friends and members of the public. The age range was from 70 plus downards to 2 year olds.

“While the amount collected was less than last year, this was mainly due to several walkers who pick up litter on a daily basis. We certainly should not be complacent (about litter). One of the main problems is dog fouling. Some owners do not pick up ‘pooh’ at all and others who bag it just then toss it away into the bushes and trees.”

Local Councillor Adrian Mahoney, who took part in the clean-up, praised the local groups for organising the event. “I’d like to thank the people who came along and gave up their time on a Sunday morning to help out. The 50 bags of litter was quite an achievement. Hopefully the event will also encourage all park users to be more responsible – and take their litter home with them.” 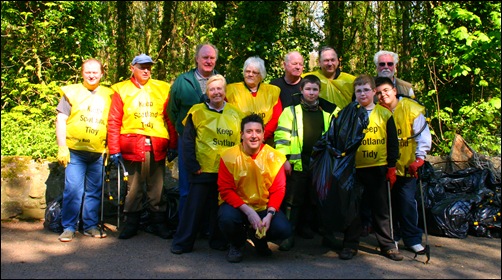