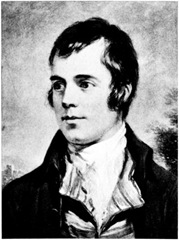 TODAY marks the 250th anniversary of the birth of the poet Robert Burns – a man with a connection to historic Kinneil Estate in Bo’ness.

Burns was friendly was one of the estate’s most famous residents, the philosopher Dugald Stewart.  From 1809 Stewart lived mainly at Kinneil House.

Dugald Stewart has given us the following account of the manners, character, and conduct of Burns.

If I recollect right, he always wore boots; and, when on more than usual ceremony, buck-skin breeches. His manners were then, as they continued ever afterwards, simple, manly, and independent; strongly expressive of conscious genius and worth, but without anything that indicated forwardness, arrogance, or vanity.

Thanks to Havard University, we have the following account, in the words of Mr Stewart himself.

“The first time I saw Robert Burns was on the 23d of October, 1786, when he dined at my house in Ayr-shire, together with our common friend Mr. John Mackenzie, surgeon, in Mauchline, to whom I am indebted for the pleasure of his acquaintance. I am enabled to mention the date particularly, by some verses which Bums wrote after he returned home, and in which the day of our meeting is recorded. I cannot positively say, this distance of time, whether, at the period of our first acquaintance, the Kilmarnock edition of his poems had been just published, or was yet in the press. I suspect that the latter was the case, as I have still in my possession copies, in his own hand-writing, of some of his favourite performances ; particularly of his verses’ On turning up a Mouse with his Plough,’ ‘ On the Mountain Daisy,’ and ‘ The Lament.’

“On my return to Edinburgh, I shewed the volume, and mentioned what I knew of the author’s history to several of my friends, and, among others, to Mr. Henry Mackenzie, who first recommended him to public notice, in the ninety-seventh number of ‘ The Lounger.’

“At this time Burns’s prospects in life were so extremely gloomy that he had seriously formed a plan of going out to Jamaica iu a very humble situation—not, however, without lamenting that his want of patronage should force him to think of a project so repugnant to his feelings, when his ambition aimed at no higher an object than the station of an exciseman or ganger ‘in his own country. Became," says the Professor, " to Edinburgh early in the winter: the attentions which he received during his stay in town, from all ranks and descriptions of persons, were such as would have turned any head but his own. I cannot say that I could perceive any unfavourable effect which they left on his mind. He retained the same simplicity of manners and appearance, which had struck me so forcibly, when I first saw him in the country : nor did he seem to feel any additional self-importance from the number and rank of his new acquaintance. His dress was perfectly suited to his station—plain and unpretending, with sufficient attention to neatness. If I recollect right, he always wore boots ; and, when on more than usual ceremony, buck-skin breeches.

“His manners were then, as they continued ever afterwards, simple, manly, and independent; strongly expressive of conscious genius and worth, but without anything that indicated forwardness, arrogance, or vanity. He took his share in conversation, but not more than belonged to him ; and listened with apparent attention and deference, on subjects, where his want of education deprived him of the means of information. If there had been a little more of gentleness and accommodation in his temper, he would, I think, have been still more interesting; but he had been accustomed to give law in the circle of his ordinary acquaintance, and his dread of anything approaching to meanness, or servility, rendered his manner somewhat decided and hard. Nothing, perhaps, was more remarkable among his various attainments than the fluency, and precision, and originality of his language, when he spoke in company: more particularly as he aimed at purity in his turn of expression, and avoided, more successfully than most Scotchmen, the peculiarities of Scottish phraseology.

" In the course of the spring (1787), he called on me once or twice, at my request, early in the morning, and walked with me to Braid Hills, in the neighbourhood of the town, where he charmed me still more by his private conversation, than he had ever done in company.

“He was passionately fond of the beauties of nature; and I recollect he once told me, when I was admiring a distant prospect in one of our morning walks, that the sight of so many smoking cottages gave a pleasure to his mind, which none could understand who had not witnessed, like himself, the happiness and worth which they contained.

“In his political principles he was then a Jacobite ; which was, perhaps, owing partly to this, that his father was originally from the estate of Lord Mareschall. Indeed he did not appear to have thought much on such subjects, nor very consistently. He had a very strong sense of religion, and expressed deep regret at the levity with which he had heard it treated occasionally in some convivial meetings which he frequented. I speak of him as he was in the winter of 1786-7 ; for afterwards we met but seldom, and our conversations turned chiefly on his literary projects, or his private affairs. I do not recollect whether it appears or not from any of your letters to me that you had ever seen Burns.* If you have, it is superfluous for me to add that the idea his conversation conveyed of the powers of his mind, exceeded, if possible, that which is suggested by his writings. Among the poets whom I have happened to know, I have been struck, in more than one instance, with the unaccountable disparity between their general talents, and the occasional inspirations of their more favoured moments.

“But all the faculties of Burns’ mind were, as far as I could judge, equally vigorous; and his predilection for poetry was rather the result of his own enthusiastic and impassioned temper, than of a genius exclusively adapted to that species of composition. From his conversation, I should have pronounced him to be fitted to excel in whatever walk of ambition he had chosen to exert his abilities. Among the subjects on which he was accustomed to dwell, the characters of the individuals with whom he happened to meet was plainly a favourite one. The remarks he made on them were always shrewd and pointed, though frequently inclining too much to sarcasm. His praise of those he loved was sometimes indiscriminate and extravagant ; but this, I suspect, proceeded rather from the caprice and humour of the moment than from the effects of attachment in blinding his judgment. His wit was ready, and always impressed with the marks of a vigorous understanding ; but to my taste, not often pleasing or happy.”

Burns himself visited Bo’ness in 1787. It didn’t impress, though. The industrial town was described by the Ayrshire poet as a “dirty, ugly place”.

Stewart, meanwhile, died in Edinburgh in 1828, where a monument to his memory was erected on Calton Hill.

Find out more about Burns and Stewart online

* Quotes from The Works of Robert Burns
By Robert Burns, Allan Cunningham
Published by H.G. Bohn, 1845